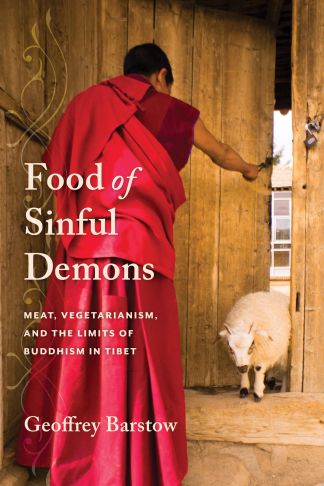 As regular readers know, for several years I’ve been working to turn my dissertation into a book.  I’m happy to report that this process is finally nearing fruition!

So feel free to go to those sites and get yourself a copy.  You can also get updates by following my Amazon author page and Twitter feed.  It’s been a long road, but it’s almost there!

Here’s the blurb, straight from the Columbia University Press website:

Tibetan Buddhism teaches compassion toward all beings, a category that explicitly includes animals. Slaughtering animals is morally problematic at best, and, at worst, completely incompatible with a religious lifestyle. Yet historically most Tibetans—both monastic and lay—have made meat a regular part of their diet. In this study of the place of vegetarianism within Tibetan religiosity, Geoffrey Barstow explores the tension between Buddhist ethics and Tibetan cultural norms to offer a novel perspective on the spiritual and social dimensions of meat eating.

Food of Sinful Demons shows the centrality of vegetarianism to the cultural history of Tibet through specific ways in which nonreligious norms and ideals shaped religious beliefs and practices. Barstow offers a detailed analysis of the debates over meat eating and vegetarianism from the first references to such a diet in the tenth century through the Chinese invasion in the 1950s. He discusses elements of Tibetan Buddhist thought—including monastic vows, the Buddhist call to compassion, and tantric antinomianism—that see meat eating as morally problematic. He then looks beyond religious attitudes to the cultural, economic, and environmental factors that opposed the Buddhist critique of meat, including Tibetan concepts of medicine and health, food scarcity, the display of wealth, and idealized male gender roles. Barstow argues that the issue of meat eating was influenced by a complex interplay of factors, with religious perspectives largely supporting vegetarianism while practical concerns and secular ideals pulled in the other direction. He concludes by addressing the surge in vegetarianism in contemporary Tibet in light of evolving notions of Tibetan identity and resistance against the central Chinese state. The first book to discuss this complex issue, Food of Sinful Demons is essential reading for scholars interested in Tibetan religion, history, and culture.

One Reply to “Book Updates!”