Today is World Vegetarian Day. It’s also the day that The Faults of Meat, my new collection of Tibetan texts on vegetarianism, is officially published. Coincidence? Actually, yes. But no doubt an auspicious coincidence!

In compiling these texts, my goal has been to provide readers with as many different Tibetan perspectives on the question of meat eating as I can. These texts include reflections on the importance of compassion, on meat in the Vinaya, on the five meats in Tantric ritual, and on the karmic consequences of meat eating. But they also demonstrate an awareness of the difficulty of maintaining a vegetarian diet in both pre-modern and contemporary Tibet, and at least one text—by Khedrup Jé—is an extended defense of meat eating. Together they provide a nuanced view of Tibetan attitudes towards vegetarianism and meat eating, largely in favor of the former, but also sympathetic to the latter.

As of today, The Faults of Meat is available directly from Wisdom Publications, and for a few dollars less from Amazon.

If we aspire to live with compassion toward all beings, how should we approach meat eating? In Tibetan Buddhism, this question has been debated since the eleventh century. The texts compiled and discussed in The Faults of Meat shed light on conversations about vegetarianism in ways that are at times surprising and always illuminating. This book is highly valuable for scholars of Buddhism, but also for people in the vegan, vegetarian, reducetarian, and omnivore communities who care about animals and grapple with the ethics of our current food system. ~ Barbara J. King, author of Personalities on the Plate: The Lives and Minds of Animals We Eat

This book explores the historical debate over vegetarianism in Tibet and breathes life into the important issuessurrounding the relationship between compassion in action and the more subtle aspects of the Tibetan Buddhist perspective. To read these well-presented accounts, some from centuries long past and others more recent, highlights the fact that today there is more need than ever for people to treat the world around them with respect, and to approach ethical and ideological conundrums with an open, courageous heart rather than an opportunistic, self-serving attitude. Just as important, however, is to be wary of turning the bodhisattva path into a dogmatic ideology that elevates puritanical morality over the wisdom and skillful means that are so essential to it. In particular, it is the vast array of wisdom-based skillful means that makes the Vajrayana so extraordinary and profound. ~ Jigme Khyentse Rinpoche

This book presents an excellent array of texts, all translated for the first time, addressing the gamut of issuesrelated to animal slaughter and meat eating within the context of Tibetan Buddhism, from the cultivation of compassion for animals to the ritual mis/uses of meat. It reveals a long tradition of reflection on the ethics of meat abstention in a climate where it had to have been particularly challenging, given the narrow range of food options. A superb resource both for teachers and students of Tibetan Buddhism and for practicing (or wouldbe) vegetarians and vegans from any climate. ~ Janet Gyatso, author of Being Human in a Buddhist World: An Intellectual History of Medicine in Early Modern Tibet 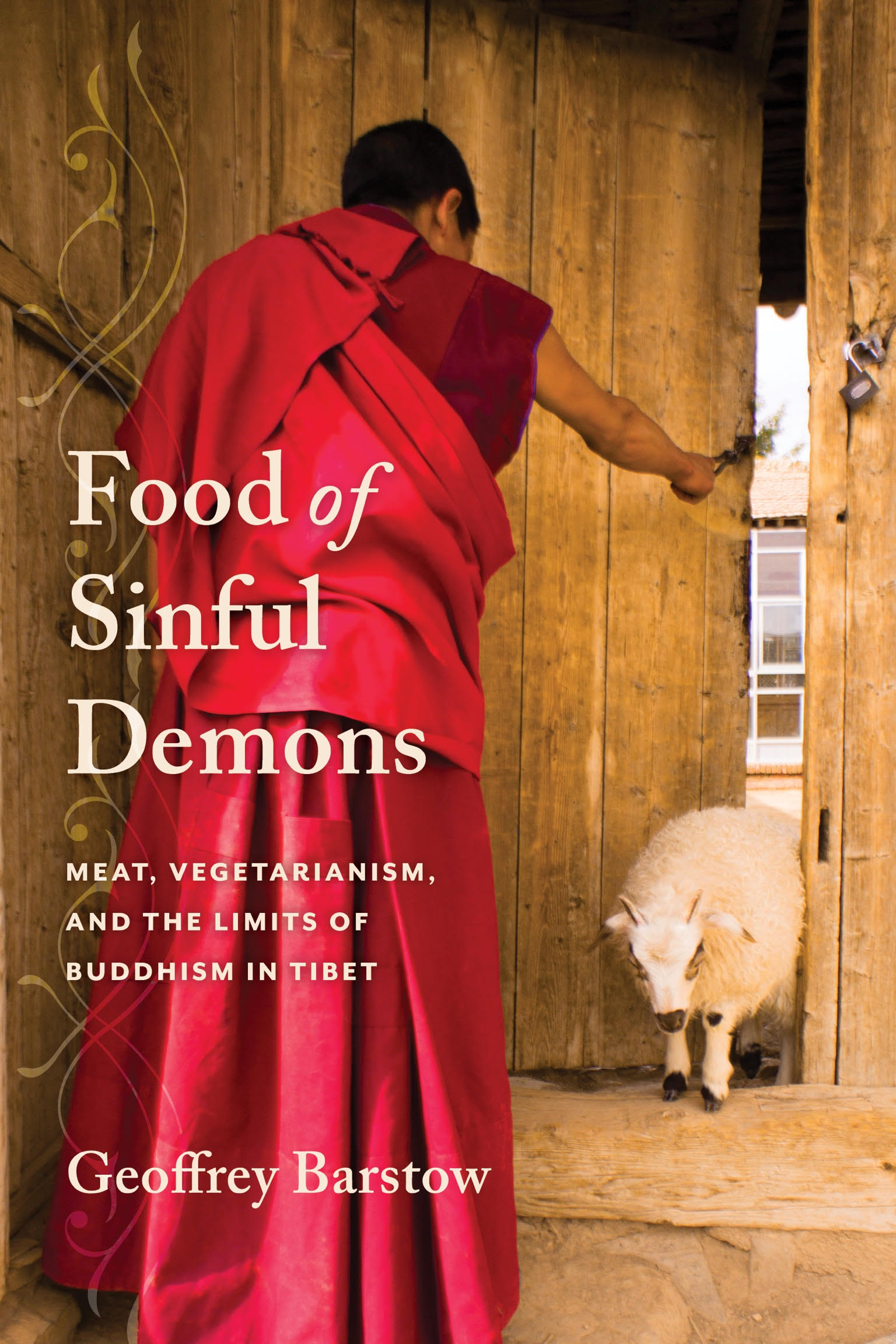 As regular readers know, I’ve spent the last seven years researching the history of Tibetan vegetarianism, first for my dissertation and then for a book.  After all these years, I’m happy to announce that my book, Food of Sinful Demons: Meat, Vegetarianism, and the Limits of Buddhism in Tibet, is now available from Columbia University Press!  You can follow this link to the CUP website for more info, including a table of contents, description, and so forth.  If you want to order yourself a copy, use the code ‘Barsto’ to get 30% off.

In this first in-depth study of the history of vegetarianism in Tibet, Geoffrey Barstow clearly shows that vegetarianism has always existed in Tibetan culture and was essentially motivated by compassion for the animals. Food of Sinful Demons is a welcome contribution to the important debate over the relationships between and among vegetarianism, health, and religion.

A creative and nuanced exploration of an aspect of Tibetan religiosity that has heretofore remained largely in the dark. An important and exciting book.

A very welcome and entirely novel work on the place of vegetarianism in Tibet, Food of Sinful Demons will make a solid scholarly contribution to religious studies, Buddhist studies, and Tibetan studies. Covering a topic of broad interest in fields from ranging religion to animal rights, it offers something new for specialists but is also accessible to undergraduates as well as educated Buddhists trying to understand the role of vegetarianism and meat eating in Tibetan Buddhism.